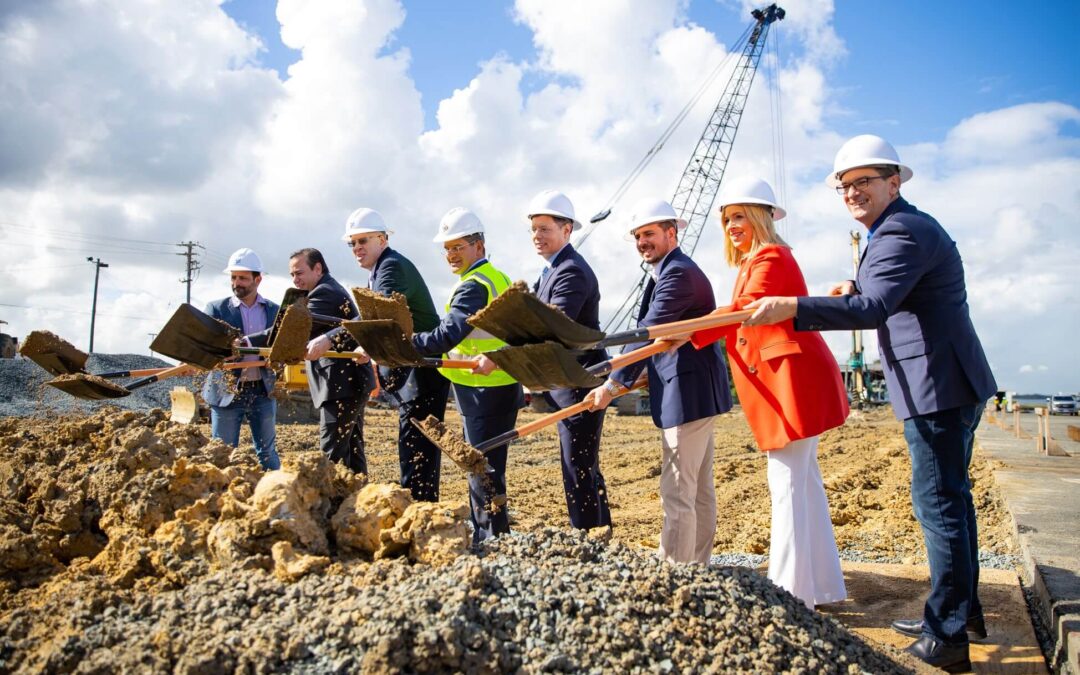 January 12, 2022 – San Juan, PR. – Modern Aviation broke ground on a new $17 million hangar development project at Fernando Luis Ribas Dominicci Airport (Isla Grande Airport/TJIG) in San Juan, Puerto Rico. The project includes the construction of two 24,000 square feet hangars with 28-foot-high doors capable of accommodating the largest business jets. The hangars are being constructed to withstand adverse weather like severe hurricanes and even earthquakes with a geo-pier foundation system, and will utilize energy efficient lighting and mechanical systems. Modern expects the first hangar to be completed in Q4 2023 and the second hangar in Q1 2024.

Modern Aviation hosted a groundbreaking ceremony on the morning of January 12, 2023. In attendance was Puerto Rico Governor Pedro Pierluisi and Joel Pizá-Batiz, the Executive Director of the Puerto Rico Ports Authority.

“Every time we celebrate a new beginning like this one, we reaffirm the very best of what our Island has to offer the entire world: productivity, experience, expertise, fighting spirit, resiliency, vision, discipline, and the hope for a better future for our families and our community. As Governor of Puerto Rico, and on behalf of all our people, I want to express to all of you at Modern Aviation—employees, associates, contractors, managers, owners, and customers—my heartfelt congratulations and appreciation for your enterprising vision in the improvement and expansion of these facilities which are about to commence”, said Governor Pierluisi.

“We’re counting on you, and you can count on my administration and me for the support you might need, now and in the future, in what we are all certain will be a very successful endeavor in the years to come”, added Pierluisi.

For his part, Pizá-Batiz praised the groundbreaking event, which he regarded as “a new chapter in Modern Aviation’s time-tested relationship with Puerto Rico.” “The Puerto Rico Ports Authority is fully supportive of projects aligned with this government’s public policy of maximizing the utilization of our assets by seeking the expansion of airport infrastructure and the services provided therein. In that spirit, it is with utmost joy that we welcome Modern Aviation’s newest project of raising state-of-the-art hangars at the Isla Grande Airport to meet the ever-growing demand for aircraft storage”, asserted Pizá-Batiz.

Modern Aviation’s CEO Mark Carmen, said, “We are very excited to be launching this new project at Isla Grande Airport in San Juan. These two additional hangars will be the first hangars at the airport capable of holding heavy business jets, which have previously had to remain on the ramp. Modern’s FBO at Isla Grande has numerous advantages for private jet customers, including the ability to drive on the ramp to and from their aircraft and the easiest access from the main roads in San Juan of any FBO in the area.”

The project is being led by Business Aviation Group, based in Centennial, CO as project manager, partnering with general contractor, Desarrollos Metropolitanos, LLC, AIR Architects, and Inspector, Felix Reach, all of whom are based in San Juan.

Modern Aviation’s Response to COVID-19
Have you voted yet?
ProPilot PRASE